Ministry of Economy and Commerce of the Kyrgyz Republic invites to the FIRST defence-industrial exhibition
The official invitation indicates the main goals and expected results of the first International Defence-Industrial Exhibition DEFINDEX-2022.
All news

The Chairman of the Board of the National Energy Holding Mr. Aitmamat Nazarov held a series of meetings with the leaders of the largest energy companies of Japan

The Kyrgyz delegation, consisting of Deputy Chairman of the State Committee for Industry, Energy and Subsoil Use of the Kyrgyz Republic Mr. Aitmamat Kadyrbaev, Director of the State Agency for Regulation of the Fuel and Energy Complex under the Government of the Kyrgyz Republic Mr. Taalaybek Nurbashev and Chairman of the Board of the National Energy Holding Mr. Aitmamat Nazarov held a number of meetings with the heads of major energy companies of Japan. 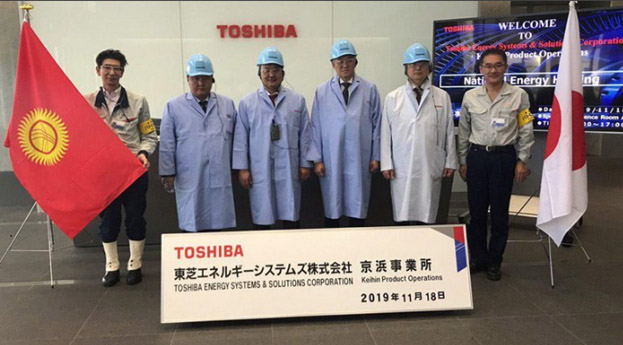 During the visit from November 18 to 20, 2019, were held meetings with the leaders of such companies as Toshiba Energy Systems and Solutions, Toshiba Plant System, Tokyo Rope MFG Co., Ltd and Ikagawa Electric.

They discussed the prospects for bilateral cooperation, in particular in the field of construction of small hydropower plants, supply of electrical equipment (cable products, metering devices, etc.).

The Chairman of the Board of the National Energy Holding also visited production facilities of Japan companies and hydroelectric power plants.

Following the visit, was reached an agreement on considering the possibility of implementing investment projects for the construction of small hydropower plants (Papan, Kirov and Karakul hydroelectric stations) through the Japan International Cooperation Agency (JICA), the Kyrgyz side will also send project proposals on the above issues for detailed consideration and study of the Japanese side.

Let’s remind that following the results of the working visit of the Head of State of the Kyrgyz Republic Mr. S.Sh. Jeenbekov to Japan (October 20-24, 2019), were reached some agreements on the development of bilateral economic cooperation between the countries, including in the field of energy.